A walk in the vineyards of Vouni Panayia Winery

"I have a thing" -as English people use to say- with those who are behind the labels and the particular vineyards of this planet. "Haven't you?" someone would sarcasticly ask. The sarcasm would be absolutely reasonable, as more or less this is what all of us, who are a bit more into wine, are looking for.

My visit in Cyprus at the vineyards of the winery Vouni Panayia was really a real revelation of the undiscovered "diamonds" that the worldwide vineyard hide and we usually pass them by, or we don't even know about their existence. Unfortunately, even if someone would spend a whole life with a suitcase on the hand, it wouldn't be enough to discover them all. 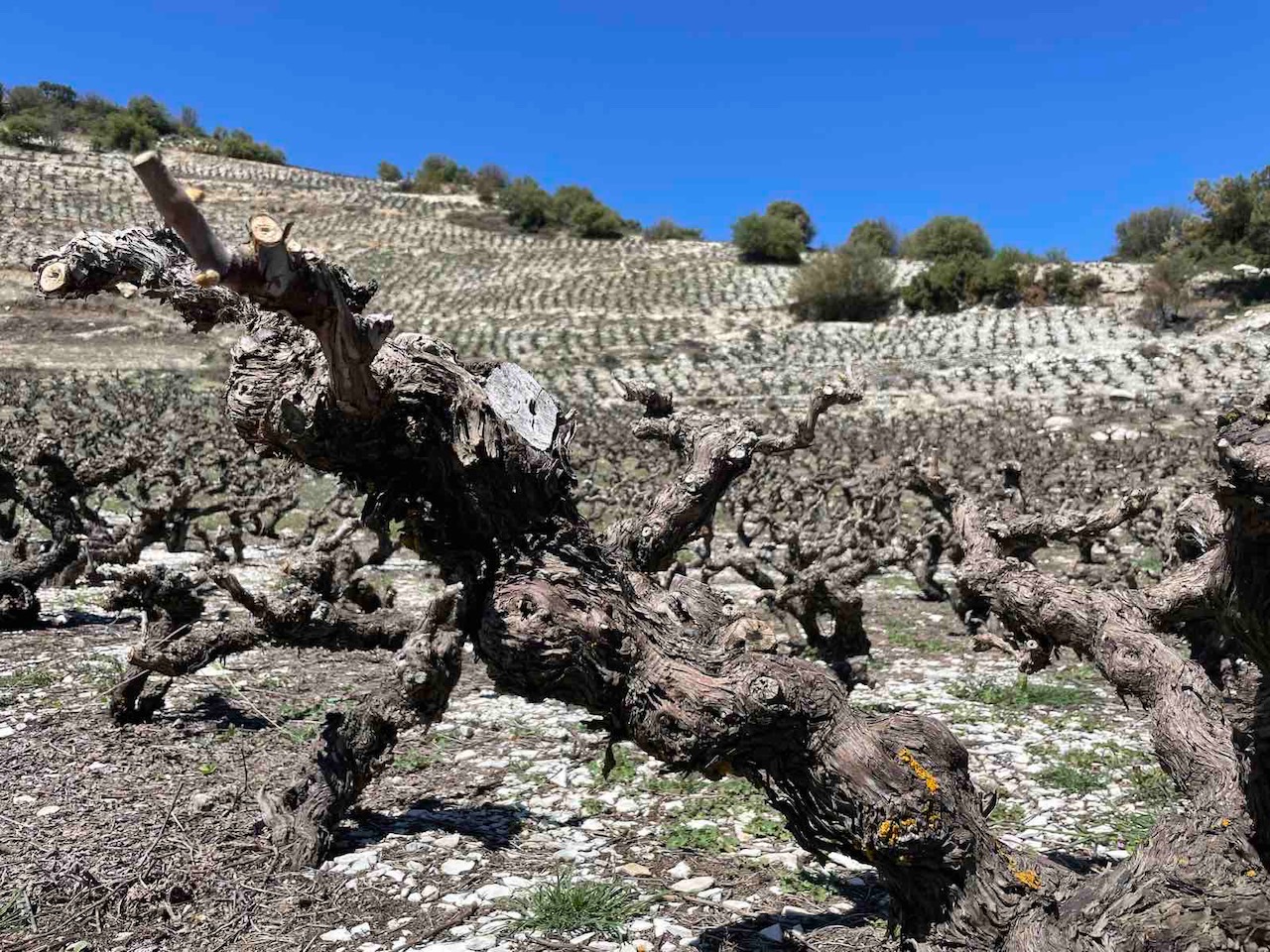 Cyprus is the third biggest island of the Mediterrenean Sea and for sure wine is not the first thing that comes in our mind when someone is refered to it. Even if the famous Koumadaria, the historical sweet wine of the island, was among the most famous wines of the Venetian era.

How could someone imagine that in an island with such latitude, warm even during the winter, it would be possible for a vine to grow and give quality wine? The impressive mountain Troodos at the central and south-west part of the island and the existence of the vineyards on its hillsides, ath an altitude that is almost 1.5 km above the sea, makes the viticulture not only possible but trully unique for the European facts. Along with Valle d’ Aosta and the wines of Monte Bianco, we are talking for some of the most mountainous vineyards of all Europe.

Walking up to the vineyards

Together with Andreas Kyriakidis we did a great uphill walk, from the winery Vouni Panayia to 1.150m altitude, that is the highest point of the area Pano Panayia, where are some of the most impressive vineyards I have ever seen in my entire life. It is diffucult for someone to describe the scenery if they haven’t seen it with their one eyes, but in the white soils of the area some vineyards on tremendous slopes looked literally like they were swinging on the top of every peak. Some of them were like they wanted to touch the sky. Steps, bush vines, old vineyards, zero phylloxera, schist and calcarious soils, rare varieties, a combination that can’t let you untouched. 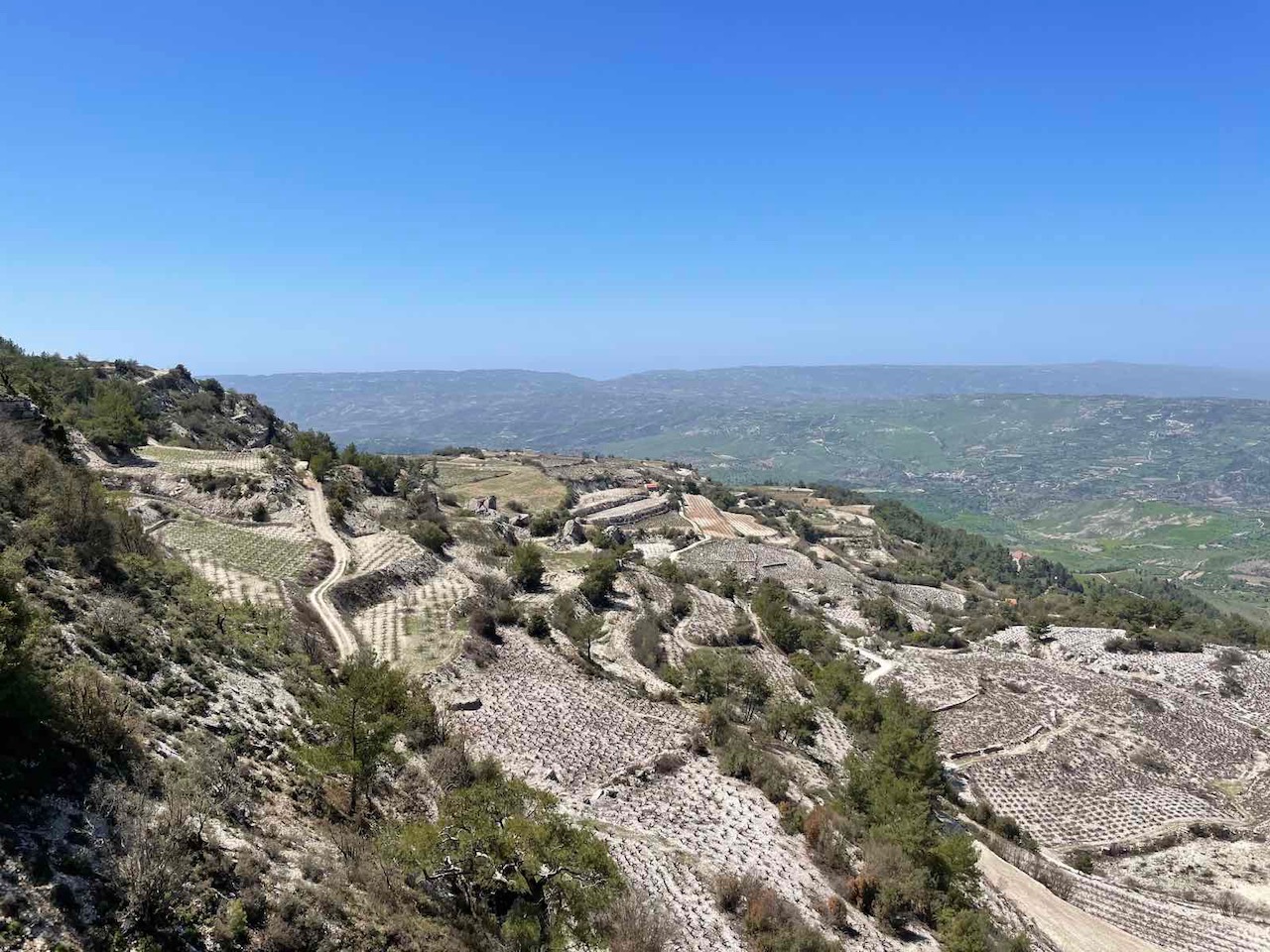 The walk was combined with my first contact with the planting of an ungrafted vineyard in the flatland of Alina. Seeing a tradition that has lasted in Cyprus for centuries and that has been lost from most regions of the planet, you can't help but wonder what the European vineyard would really be like if it had been saved from the phylloxera insect. In any case what you feel is the power and energy of nature, an eternal reality, which existed and will continue to exist long after we ourselves. And that is truly a unique feeling.

Somewhere in the whirlwind of life we ​​experience, we have to stop for a while to take a breath and understand what is happening around us. To understand the value of people like Mr. Andreas who decided to dedicate their lives to preserving centuries-old traditions and values. Without Mr. Andreas and his ilk, I don't know if we would be able to talk to the younger generations about Xynisteri, Maratheutik, Giannoudi, Vasilissa etc. tomorrow.

My stop for a few minutes from the frenetic rhythms was on the stone of Saint Elias with the plateau of Plakota spread out in front of me and Mr. Andreas and his son Pavlos serving us “shoushioukos” (a traditional Cypriot sweet, made from must and nuts, the taste of which I still have in my mouth). We almost became one with the environment, lying on the stones furiously soaking up the Cypriot sun, us city kids, who miss contact with nature so much. 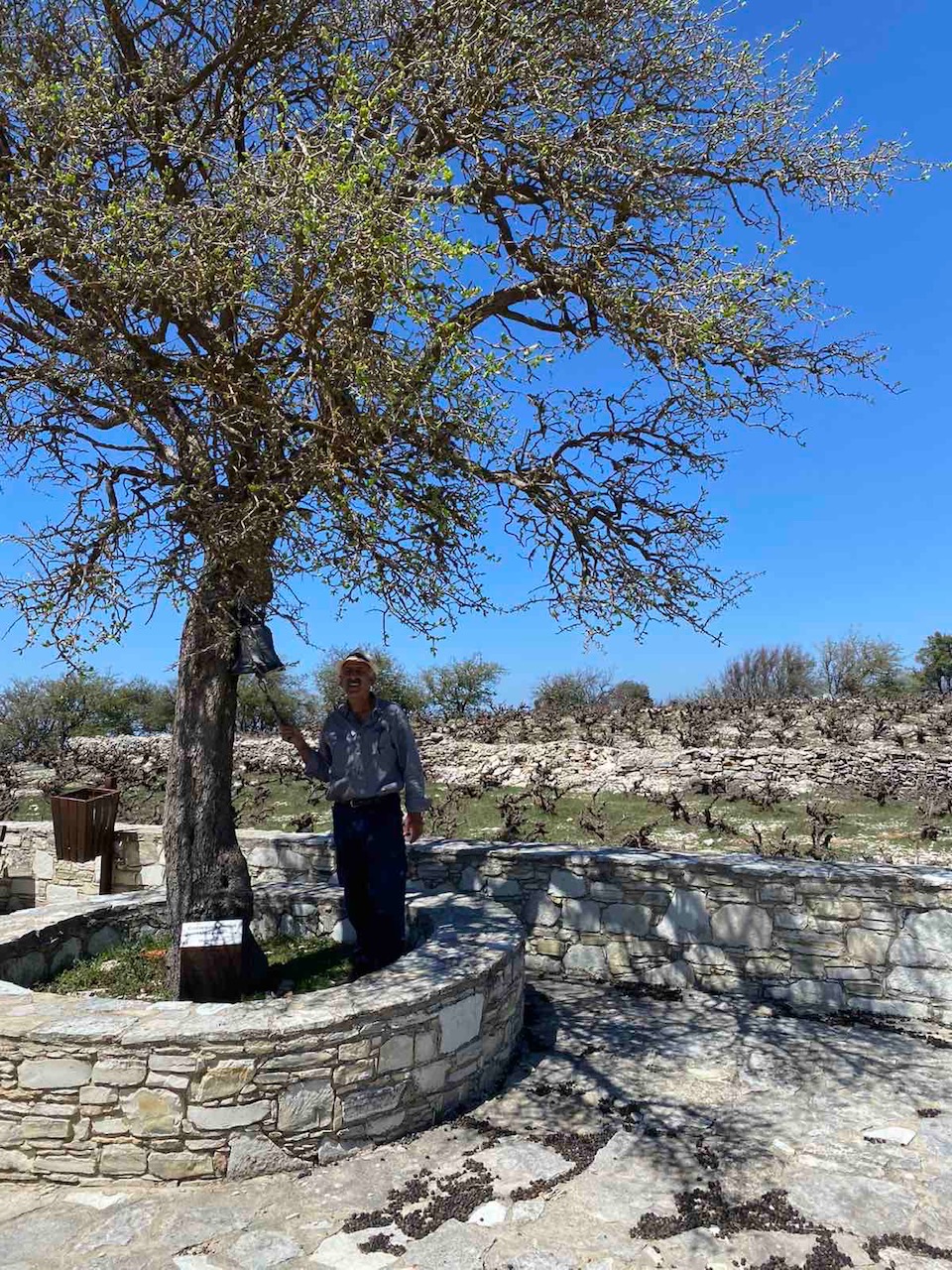 A little later we continued our perimeter walk passing through an area where the vines surrounded you from everywhere after every uphill turn. Mr. Andreas vanguard leading the way and telling countless stories about his birthplace, the bushes looking as if they have always been planted on these slopes and Pavlos, one of the three sons of Kyr-Andreas, following behind with his own farm car.

At some point, having acquired a complete picture of the area, having lit a candle to the prophet Elias, having seen the steepness of the topography, the ravines, the cliffs, the hanging "bushes", we took the way back to the 830m where the winery is waiting for us to taste.

At one point in the way back, Pavlos, driving, got in front and started driving a little faster towards the winery, apparently to prepare the tasting that would follow. I didn't pay much attention at the time, but a little later, during the tasting, seeing father and son side by side this passing acquired - in my usually paranoid mind - a tremendous semiotic interest.

In those moments I realized the importance of that overtaking and the essential contribution of Mr. Andreas. It is not simply the fact that he envisioned Cypriot wine in a different place than it was many years ago, that he was the first to deal with native Cypriot varieties, at a time when no one else did, that he saved many of them and continues to search every stump in his area to find others.

His greatest achievement is that all this effort of his finds continuity, that such people in a magical way manage to transmit their values ​​and find fellow travelers in their endeavor. Giannis, Pavlos and Petros have passed on continuing the amazing work of their father. And my own mind goes back to the planting of the ungrafted vineyard and that indescribable feeling I received.

I am now sure that Mr. Andreas did his duty in the best way by giving this unique vineyard the opportunity to continue its long journey through time. I think it's our turn to do our part, "shouting" that in this corner of the planet there are amazing people, shocking vines, unique varieties with a terrible past, a great present and certainly a much better future.

My mission is to produce wines that give smiles and celebrate life.
Read the article

On the top of the mountain Ainos(Part 1)

A trip to the vineyards of the island after an invitation of the newly established Association of...
Read the article

Our walk in the roots of Psiloritis, in the vineyards of Fourfouras and Melampes, in southern...
Read the article

In the small winery Sant’Or, Panagiotis works alone in complete harmony with nature.
Read the article

How it all started
Read the article

This Easter I will follow no food-wine pairing, I will just drink wines that I like and love.
Read the article

Different glass for each wine? I do not think so…

At the end of the day you are free to drink what you want, eat what you like and use whatever...
Read the article